The oldtwon Murten is situated on a hill at the Murtenlake.

Murten from the sky – Castle Side. © Fribourg Region
Murten, located in the heart of the Three-Lakes region between Bern and Lausanne, is the capital of the Lake District (canton of Fribourg). As a small medieval town, situated on the Swiss plateau on the edge of the Grand Marais, Murten overlooks the lake which gave it its name (453 m. alt.).

Murten offers its visitors many sights, such as its castle, its ramparts, its picturesque lanes and its arcades.
Good to know
Good to know 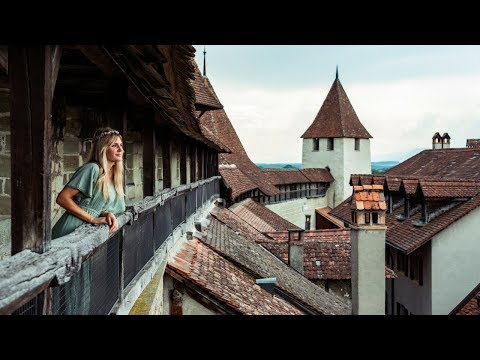 Murten - Once upon a time

Geocaching is an outdoor recreational activity, in which participants use a GPS receiver or mobile device to hide and seek containers, called "geocaches".

Discover our old town’s charm and dive into its surprising history while accompanied by one of our guides.

Visit the original battlegrounds and experience the battle from the perspective of Charles the Bold.

From the ancient lake-dwellers to the Battle of Morat, in this former mill you will discover the history of the region. The museum's permanent exhibition evokes 150 years of archaeological digs on the shores of the Lake of Morat.

Discover Murten on Your Own
Guided city tour, Murten

With the brochure "Murten - Enjoy it" you go on a walk through the old town on your own. You will discover the most beautiful viewpoints of Murten, you will go on the unique walkable rampart walls and you will stroll through the arcades of the main street.

Visit the town of Murten in a special way! Thanks to the Secret Tour of Murten, you and your family can discover confidential places full of magic.